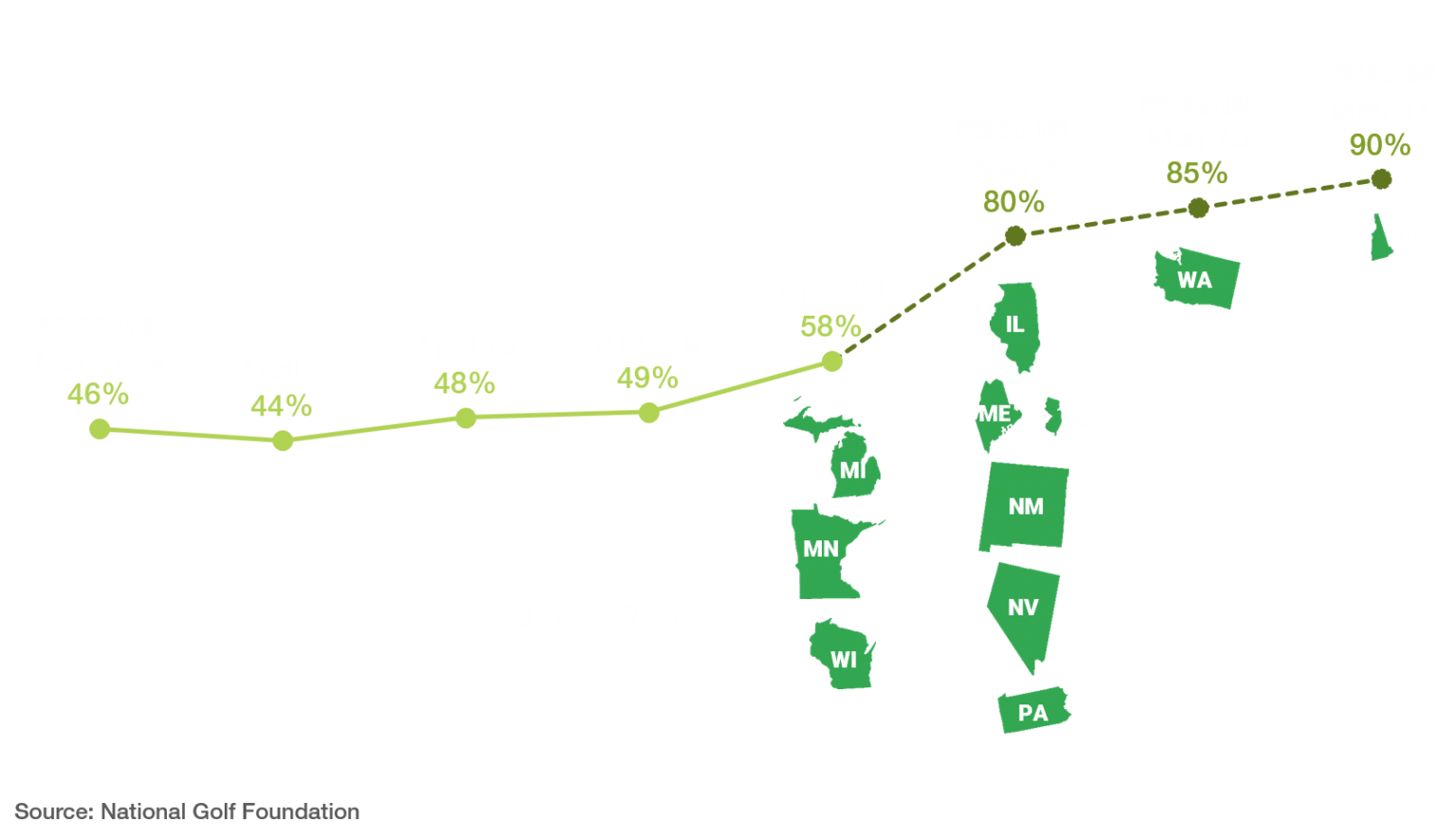 NOTE: Not all golf facilities immediately restart operations when allowed to do so in their particular state. For example, although Illinois, Pennsylvania, Nevada, Maine, New Mexico and most of Hawaii were cleared to reopen on May 1, not all ~1,800 courses in those states did so on that day. Whether due to preparation and planning requirements or seasonality, some facilities will reopen at later dates. This progressive reopening trajectory is factored into projections. Also, most reopenings are not at full operation – coming with restrictions like walking-only, single-occupant golf carts, lengthened tee time intervals, and/or limited or no food services (among other precautionary measures).

Illinois, Pennsylvania, Nevada, New Mexico and Maine were all permitted to reopen courses as of May 1, with Pennsylvania Governor Tom Wolf noting that the 700 courses in his state help “maintain positive physical and mental health.” This continued a recent trend, as Michigan, Wisconsin, Minnesota and New York all recently gave permission for golf to resume with significant operational safeguards.

Washington Governor Jay Inslee echoed the “physical, mental and emotional well-being” benefits from outdoor activities such as golf in announcing that the state’s nearly 300 courses can open to play starting May 5. In New Jersey, golf courses can reopen on May 2.

While the recent surge in openings has been significant, not all facilities reopen as soon as allowed; for example, while some New York courses had been open for more than a week, play at the municipally-operated facilities on Long Island, including Bethpage State Park’s courses, didn’t resume until April 27. Additionally, some facilities in the northernmost parts of states that have given golf the go-ahead — Minnesota, Michigan, Wisconsin, New York, and Maine among them — are still preparing to officially start their season due to weather.

In California, which has the second-most courses of any U.S. state, the number of facility re-openings continues to steadily increase as more counties ease golf restrictions. And in Florida, courses in golf-rich Palm Beach County, as well as Miami-Dade and Broward, are still re-opening in waves after being cleared to resume play on April 29.

Note: This projection could climb higher if other jurisdictions opt to ease restrictions on golf. It is also assuming no shutdowns by state or local governments, and no additional voluntary closures of significant scale.

Leave your contact details and we'll get in touch to show you how the system and how it can add value to your course.
Majority of PGA Tour pros need coronavirus testing in place at every event to...