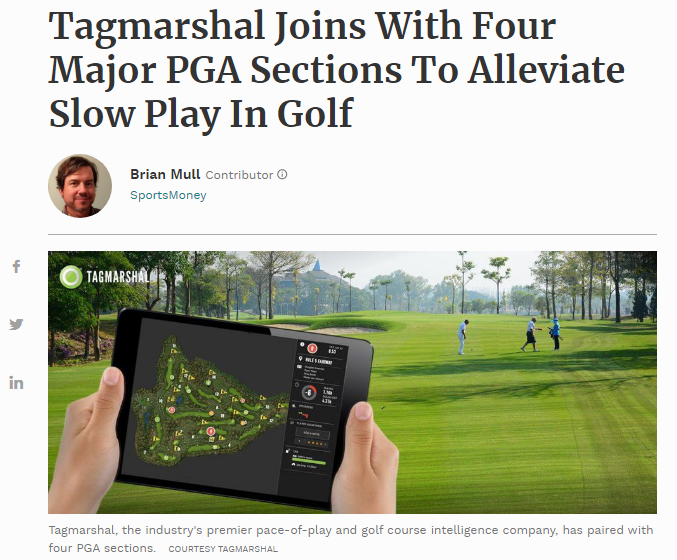 The company, a leader in golf course intelligence and pace-of-play management, has partnered with four prominent PGA sections to introduce the product at tournaments over the next two years.

The North Florida, South Florida, Carolinas and Metropolitan (NYC area) PGA sections will use the software at major section tournaments and Tagmarshal will conduct workshops and webinars to provide education and training to each section’s members.

In theory, Tagmarshal was conceived in 2014 when CEO Bodo Sieber’s business partner ran into a three-group logjam on the 15th hole at a destination course while on a golf vacation. Unhappy with the response from the course management and possessing the tech knowledge to conceive the software, the business partners produced a first-generation software that was introduced at the PGA Merchandise Show in 2015.

Tagmarshal, an Irish company with a U.S. base in Atlanta, uses small “tags” clipped onto golf bags, installed on carts or offered on handheld devices, which transmit geo-location data. The software identifies the ‘turtles’ – risk groups whose slow play can interfere with the experience of golfers on the course. It also can focus on certain holes, or trouble spots on the course, such as a reachable par-5 followed by a difficult par-3 or a particularly penal par-4 defended by out-of-bounds stakes or penalty areas (formerly known as hazards). Public, private and resort courses alike have improved pace-of-play and customer experience, using Tagmarshal to generate more efficient rounds with less staff interference.

“And obviously the more revenue-geared ones among them are trying to couple that optimizing revenue and our system can help them with both. That’s why we’re finding traction. But the middle of the market is where we have most of our customers, the $40 – $50 daily fee and semi-private courses.”

A golf course’s investment ranges from $500 – $1500 per month, depending on the package they desire from Tagmarshal.

Tagmarshal’s growth and partnership with significant sections of the PGA professionals who manage and teach the game coincides with the USGA emphasizing pace-of-play when it overhauled the rules of golf in January. Those who quit golf often point to the time commitment required as a reason for putting the clubs in the closet for good. According to Tagmarshal’s data, pace-of-play is more important to golfers than course design or clubhouse amenities. The USGA explained its reasons for emphasizing pace-of-play as such:

The Carolinas PGA is one of the largest sections in the nation, with more than 2,000 professional members. The history of the Metropolitan dates to the origin of the PGA in 2016 and includes some of the nation’s oldest and most prestigious clubs. North Florida and South Florida are, obviously, home to year-round golf, offering an array of public, private and resort courses. Each may have a slightly different objective but they share a distaste for earning the reputation as a haven of slow play.

Leave your contact details and we'll get in touch to show you how the system and how it can add value to your course.
Tagmarshal Partners with PGA of America Sections