Golf cart tracking software is not usually associated with cross-border police tracking! But in December 2020 this changed, when Tagmarshal received a call for assistance from the National Golf Club of Louisiana, a top 5 public course (as voted by Golfweek), based in Westlake, Louisiana. They’d been alerted to a serious Geofence breach that indicated the theft of two golf carts. These were the events as they unfolded…

On 8 December 2020, the Tagmarshal support team received a call from the Director of Golf David Kaspar, requesting urgent assistance – the team had seen two carts trigger their geofence and then disappear from view off the property, leading the team to believe that they’d been stolen.

Kaspar, who gives an account of the events, said:

“Two men cut the chain to our fence gates after 2:00 a.m. on Dec 8th. The men somehow were able to start two of our golf carts (no keys were in carts at the time of theft) and drove them off the property.”

“We had just begun using our Tagmarshal system at the time and were still getting used to the new system. That being said, we didn’t have our Geofence system setup properly to trigger the after-hour call that the carts were moving and I didn’t notice the carts missing for a few days,” continued Kaspar.

Upon receiving the request, Shongwe assisted in initiating the investigations from HQ, saying:

“When we retrieved the tag numbers, we noticed that the tags still received updates as a result of the tags’ battery life being in good health.”

“The data collected by the tags was transmitted to our cloud servers, where we were able to extract the geolocation data. The result, we were able to pinpoint the carts’ every route and exact location, from the day they were stolen,” concluded Shongwe.

Based on the data received from tags, Tagmarshal was able to see that the stolen carts were now located in Fort Worth, Texas almost 360 miles from their original locations. The Tagmarshal team shared this information with the course and the local police department.

The information was detailed and sufficient enough to launch a thorough investigation, leading to 4 arrests being made.

“Because of the Tagmarshal tracking of the carts, our Police Department was able to find the exact locations that the carts, which were loaded on a truck, traveled that night and have since made four arrests with several others under question. It’s highly likely that we were stolen from a very organized crime theft ring.”

“Tagmarshal was able to help identify locations such as driveways, truck stops, house garages, and streets driven for the entire time the carts were traveling to the final location of the pings.”

Unfortunately, the felons noticed the GPS tags and removed them from the carts. At this stage, the recovery of the two carts remains doubtful, however because of the arrests, the police were able to identify other items stolen by this group and possibly some stolen items from the course before.

“The Tagmarshal team did some very neat stuff to help our Police and the Sheriff’s office from Fort Worth. If other golf courses are thinking of Tagmarshal as only a pace control feature, I would be one that says they are missing out on another very important feature – safety!” concluded Kaspar.

A great team effort between the course, Tagmarshal and the local police force, lead to a positive outcome for all!

There are a number of benefits for tracking golf carts to golf course operators. Having Tagmarshal’s classic tags or 2Way golf cart devices installed helps golf operators to optimize their on-course operations, driving efficiency and revenue, and enhancing player experiences through the pace of play and field flow.

Additionally, the GPS tracker, together with its geofencing technology and real-time automated notifications means golf operators will always know exactly where their golf carts are, preventing cart theft on the course.

Tagmarshal’s tracking technology is trusted by 30 of the top 100 USA courses and 300 other private, daily fee, and resort courses.

“The system is phenomenal. The data is fantastic, extremely insightful, and valuable. Plus, the value it adds to due diligence and management reporting. The service and support have been great too, couldn’t ask for better. I really can’t see any course out there not using it,” said Jim Morris, Head Golf Professional at National Golf Links of America.

The golf cart GPS tracking feature was designed for golf operators to accurately display real-time notifications and alerts when there are Geofence breaches, to ensure player safety, player compliance and reduce damage to areas or areas under course maintenance, and more importantly cart security from theft. 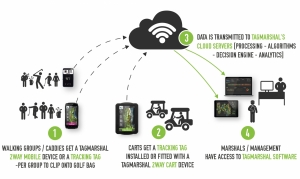 When the Geofence is breached, messages are automatically sent from the system notifying golfers that they are breaching a geofence zone. Golfers can then respond and acknowledge it, confirming whether or not they need assistance, by sending a text message or a  popup, to every operational staff user. 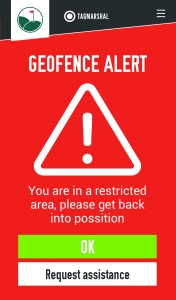 To find out more about how the golf course intelligence system works book a demo today with our product specialists.

Leave your contact details and we'll get in touch to show you how the system and how it can add value to your course.
Tagmarshal Recognized at ING Industry Honors Awards

Tagmarshal: Improving Pace of Play at the World’s Top Courses
Scroll to top