As a semi-private club open to the public, Mountain Branch Golf Club in Joppa, Maryland, faces the same pace of play problems that other daily fee courses often battle. 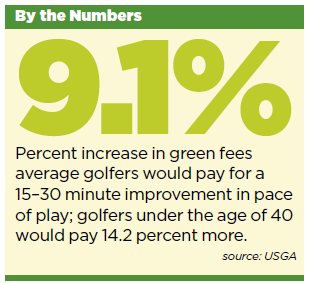 “There was always this perception that you’re a public course, so golfers are going to be out there for five hours or more. ‘How long is this round going to be?’ ” says PGA Head Professional Matt Summers.

“We’re always looking for ways to improve our image and level of service, and ownership was on board with finding new ways to do that.”

Summers was also looking for a way to shift payroll away from part-time course rangers so Mountain Branch could spend more money on its PGA Professional staff. In talking with other golf professionals, he decided to look into Tagmarshal’s services three years ago.

By adding Tagmarshal GPS units in Mountain Branch’s golf car fleet – under the seats, hidden from customers – Summers and his staff were immediately able to monitor pace of play from the golf shop, or from anywhere on the property if they were using a smartphone, tablet or device connected to the Internet.

As a result, Mountain Branch was able to do away with marshals completely on Mondays through Thursdays and often goes without marshals on weekends. When the golf staff sees a pace of play problem using the Tagmarshal app, they can go directly to the group causing the slowdown.

“It’s the toughest job on property, telling someone they’re playing slow on a busy day,” says Summers, who is in his 13th season at Mountain Branch.

“But now that it is usually a PGA Professional coming out to talk with the golfers, they respond with a lot more respect. And if they dispute that they’re behind, we can show them the Tagmarshal data as backup. That makes it an easier discussion, and they’re more likely to pick it up.”

“When we go out to talk to a group about speeding up, we’ll watch their progress on Tagmarshal,” Summers says. “If they catch up to the pace, we’ll send the beverage cart out and buy them a round as a way to thank them for getting back on track.”

This combination of technology and customer service has helped create an environment at Mountain Branch where pace of play is valued by the facility’s 300-plus members and many regular daily fee players. Average round times have improved by more than 15 minutes during peak season, from 4:08 to 3:53 and the golf staff has more flexibility and information to rely upon in setting the tee sheet at the facility, which hosts more than 23,000 rounds annually.

“We don’t know what kind of golfer is going to walk through the door on a given day, so we’ll use the data to know whether or not we should throw an open tee time in if we have a lot of public play on a given day – we can always fill it in later if things are smooth, and we know if we can squeeze a group in if we have people walk in wanting to play,” Summers says. “And because Tagmarshal keeps data on individual golfers, I can see if those golfers are fast, which helps with the decision about getting them out.” 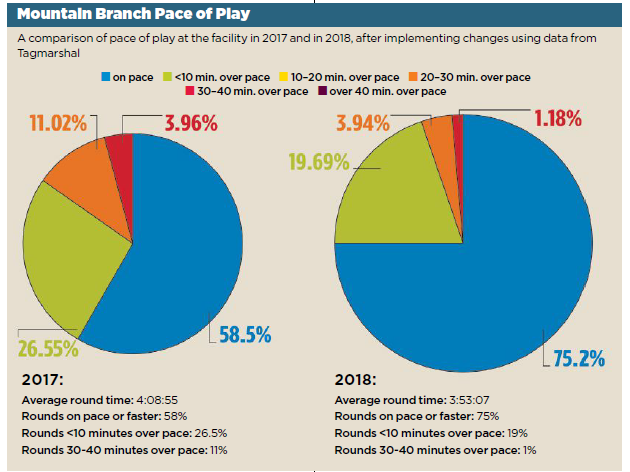 Summers is also looking forward to using the Tagmarshal data in new ways going forward. For 2020, his goal is to optimize the number of teams Mountain Branch can host in its weekday golf leagues, which are a steady source of green fees and food & beverage revenue.

“We have heavy league play in summertime, and we’re going to tag each group and gather the data on whether we can go from 24 to 26 or 28 teams in a league,” he says.

Pace of play is still an area the golf staff at Mountain Branch needs to monitor. But by having more information, the golf staff is able to make precise decisions to keep things moving.

“When you get that call from a group saying there’s a slowdown, we can look in real-time and see the pace – maybe that group is actually playing faster than the normal pace. That helps us decide whether there’s something that needs attention, or if it just seems that way to one group. Either way, we can deal with reality instead of perception,” Summers says.

“Most important, when players come off 18 we see more happy faces. That keeps the staff in a good mood, too, which is why this is one of my favorite things we’ve done while I’ve been at Mountain Branch.”

Leave your contact details and we'll get in touch to show you how the system and how it can add value to your course.
PGA Magazine: 11 takeaways on improving pace of play

PGA Magazine: Turning Time into an Ally
Scroll to top