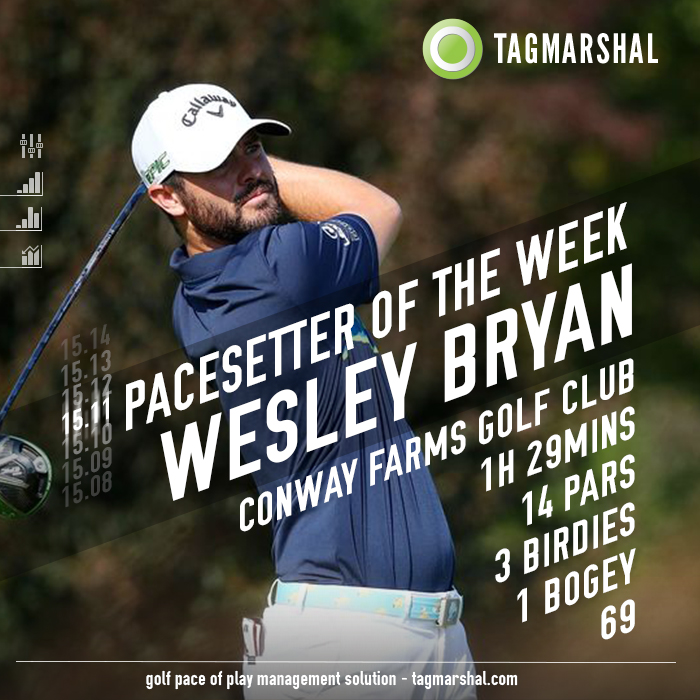 PaceSetter: 5 facts about Wesley Bryan’s fast round at Conway Farms

On Sunday, Wesley Bryan was out to make a statement to dismiss the conviction that tour players play slow by finishing his final round on Tagmarshal partner course Conway Farms in impressive time.

Bryan shot 2-under 69 in 1 hour 29 minutes playing as a single in the first group off on Sunday at Conway Farms Golf Club, making it his best round of the week

Blink and you might miss it.@wesleybryangolf's final round at the @BMWchamps was crazy fast. ?? pic.twitter.com/SqUBqChL8B

2. A stroke a minute

69 strokes in 89 minutes meant that Bryan averaged about a stroke per minute playing approximately 5 minutes per hole.

He basically ran a 13.5-minute mile while shooting a 69. Impressive right?

By the time Bryan played his last stroke at the back 9 the group behind was only on Hole 9.

Kevin Na, notoriously known as one of the slower players on tour, shot 70 in under 2 hours at last year’s Tour Championship had shared a comment on Bryan’s feat.

“I’ll tell you what – nobody’s going to break that record shooting even par or better,”

“If you go ahead and quick-hit it, yeah, you’ll break it.”

“To birdie the last four holes, that’s pretty cool.”
Na ended the tournament at 13 over.

Conway Farms Golf Club is a private club that prides itself on the quality of the total golf experience and the fellowship shared by members and guests. It is an 18 hole, par-71 walking course committed to fast play and continuously advancing the traditions of golf. Tagmarshal adds value at Conway Farms with its unobtrusive player and pace tracking system. http://www.conwayfarmsgolfclub.org/

Tagmarshal is a golf course efficiencies and field management solution that turns pace-of-play into an asset. The system uses a series of small “tags” clipped onto one golf bag per group, or installed into carts, which transmit geolocation data. Industry-leading algorithms identify risk groups with accurate, objective support to alleviate pace challenges before they arise. Public, private and resort courses using Tagmarshal realize substantial returns on investments through improved on-course experiences achieved with less staff, as well as increases in daily rounds. Easy-to-use pace analytics, weather data integration and geo-fencing complete the offering.

Leave your contact details and we'll get in touch to show you how the system and how it can add value to your course.
5 Questions with Jim Lombardo – Erin Hills