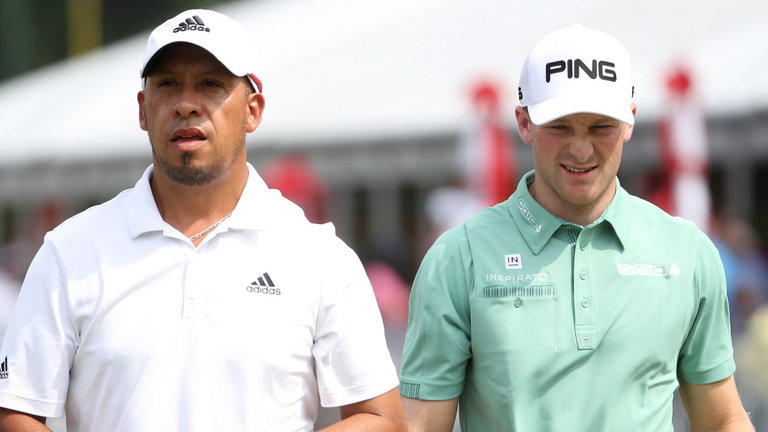 What a remarkable weekend for pace of play it was – almost a tug of war between the two leading professional Tours in the world. And as proponents of slow-poke punishments, we could hardly be more pleased. Although, as a twist in the tail, it made a mockery of another chief professional circuit by comparison come Sunday.

It all started on Thursday at the Zurich Classic, as duo Brian Campbell and Miguel Angel Carballo – perhaps not household names, but bona fide PGA Tour players nevertheless – were informed that they had been penalised a stroke on the 14th for slow play, having fallen behind on the 10th, and subsequently failed to play their shots within the 40-second statutory limit imposed on those on the clock.

It made them the first players on the PGA Tour since Glen Day in 1995 to suffer this particular fate. Let’s quickly put that into perspective: that’s 22 years ago. Clinton was still in his first term as president. OJ was on trial for murder. No one even knew who Tiger Woods was!

And in that time, we’ve had to watch as the likes of Ben Crane almost proudly stroll around the course at tortoise pace, with officials sitting on their hands as the game of golf slides slowly but surely towards irrelevance.

So what suddenly changed? What awoke them from this ignorant slumber?

Our friends across the pond are seldom credited with innovation, and the European Tour has plenty of problems. But they’ve led the way on the war against slow play with numerous penalties dished out in the last five or so years. And since chief executive Keith Pelley came into power in 2015, the crackdown has escalated with the announcement of a new “monitoring penalty” for those who exceed 50 seconds per shot (40 if not the first to play within the group). The threat for this also hits players where it hurts most: their pockets, with a $2,500 fine issued.

This, in conjunction with a determination to impose stroke penalties on those out of position, has rightfully struck a bit of fear into players, with Irishman Shane Lowry telling Golfweek recently: “American referees are not as intimidating as the European referees. When you see John Paramor or Andy McFee (the European Tour’s chief referees) coming along, you know you want to speed up, and you know they will be hard on you. That’s what I like about the European Tour: they are a lot harder than they are over in America.”

And so, even as the PGA Tour looked to be laying down a marker, their European counterparts stole their thunder within hours, as Korea’s Soomin Lee was docked a shot for slow play on Saturday at the Volvo China Open. Let’s once again put that into perspective: a weekend double of slow-play penalties on either side of the Atlantic. Who’d have thunk it?

But just as the positive momentum was building, the LPGA Tour ground it to a snail-paced halt. Fresh off the Lexi Thompson controversy, those watching the Volunteers of America Shootout on Sunday were forced to endure a two hour, six-hole playoff. Monotonous enough that it was on the same hole over and over again, but it descended into utter farce as Christie Kerr blatantly tried to slow play her opponent. Only analyst Judy Rankin had the guts to call her out: “I have great respect for Christie Kerr but she is really taking a long time here.”

She simply said what we were all thinking, but there were no actions from officials, no reprimand, no warnings. And even though justice prevailed with opponent Haru Nomura going on to win, the damage to both the LPGA’s brand – and the game of golf as a whole – will endure.

There has been some fallout since, and it is hard to have a great deal of sympathy for the LPGA. Slow play is a core problem the sport of golf currently faces, and is a significant contributor to its recent decline. Our globalised world is an increasingly faced-paced one, where instant gratification is the order of the day. In that respect, golf is becoming a square peg in a round hole.

And professionals carry the torch with profound responsibility in this respect. They are the standard bearers, and the consequences at amateur level are significant. It isn’t just that impressionable youngsters will follow their lead. It is also that outsiders or non-golfers look on with confusion and derision as they watch the grass grow quicker than the game’s best players finish a round.

It’s kryptonite for those trying to grow the sport, and this issue’s importance should not be underestimated. It is good to see the European Tour dragging its bigger American brother in its wake, but all circuits, officials and players around the world should sit up and take notice. And do more. Golf has a fight on its hands to keep up with the times, and “keeping up with the time” is central to that.

Mike fell in love with the game from a very early age – a passion that hasn’t diminished ever since. He earned provincial colors throughout his junior years, but by the time he reached Varsity, the realization set in (thanks largely to some cold ales) that it was time to favor the pen rather than his clubs. He now writes for Golf Assessor along with a few other sources.

Leave your contact details and we'll get in touch to show you how the system and how it can add value to your course.
Weather Analysis With New Partnership

Tagmarshal Pace Of Play Integrates To EZLinks Golf – The Industry’s...
Scroll to top