The golf industry’s recent emphasis on accelerated pace of play as the answer to golf’s time problem with millennials and others has not come without a price. While the USGA attempted to get the faster play word out to golfers through its “While We’re Young” TV ad campaign, the message was disseminated to operators that shaving a few minutes off the time required for an average round of golf would increase play and customer satisfaction. It’s difficult to measure exactly how much and in what way more aggressive pace of play monitoring has impacted customer traffic, but the industry-wide data on participation and rounds does not indicate that slightly faster play is the answer. Additionally, in some cases, more aggressive marshalling has meant increased payroll and caused friction with customers who feel they are being blamed and unduly harassed for delays that are not their fault.

A new product called Tagmarshal, initially launched at the 2015 PGA Merchandise Show, is designed to address those problems, as well as the gap in cart-mounted GPS tracking systems that occurs at courses with a high incidence of walking golfers. The Tagmarshal system can either be installed on golf cars or attached to the bag of one member of a walking foursome. Pro shop staff members can then monitor the progress and pace of every group in real time and get a more accurate reading on slow groups who are causing bottlenecks and slowing overall pace of play. Rather than having several course marshals roaming the course and occasionally making inaccurate assessments of which groups are actually causing a slowdown, the course can dispatch a marshal to the source of the delay, armed with recorded proof that the group in question is slowing play.

Bodo Sieber, the co-founder and CEO of Tagmarshal, said that the target course profile is one which is really busy and/or is making a concerted effort to control pace of play. If, like two of the company’s earliest adopters Whistling Straits and Erin Hills, the course is either walking-only or has a significant number of walkers, the Tagmarshal system is perhaps uniquely suited to monitoring pace for the full tee sheet. Sieber estimated that the system can provide up to 40 percent more coverage at frequently walked courses. “The Tagmarshal management system has enabled us to effectively implement our pace of play policy, assisting us in reducing playtime, which enabled us to add an additional tee time for extra capacity,” said Erin Hills Head Pro Jim Lombardo on the Tagmarshal web site. His comment illustrates a revenue incentive in the additional tee time for sale to accompany potential cost savings in marshal labor. The system also offers additional software metrics such as “geofencing” to detect carts or golfers who venture into restricted areas or leave the property, as well as other statistical analysis of play patterns.

The Tagmarshal system includes both hardware components which can be either purchased or rented and software components. Sieber said the basic or core software solution costs courses $490 per month, while packages with additional features run $690 monthly. The hardware costs as little as $150 per month if rented. In either case, Sieber said that the cost could potentially be offset or wholly covered by savings in marshal labor or by adding an additional tee time.

Sieber said that anecdotal evidence indicates that one of the primary causes of discord between golfers and marshals is arguments about who is to blame for a gap in play, or slow play. As he noted, “It’s not us, it’s the group ahead of us” is a frequent claim. With the Tagmarshal system, he said, marshals can not only see exactly which group is causing delays, but demonstrate that to the offending players.

The company is headquartered in South Africa and has some client courses in Europe and the U.K., but Sieber said the company’s focus is the U.S. market. The company’s goal, he said, is to establish long term working relationships with courses, continually expanding and refining software applications and technology to meet client course needs. For those interested in learning more, the company will be exhibiting at the PGA and GIS shows this year. 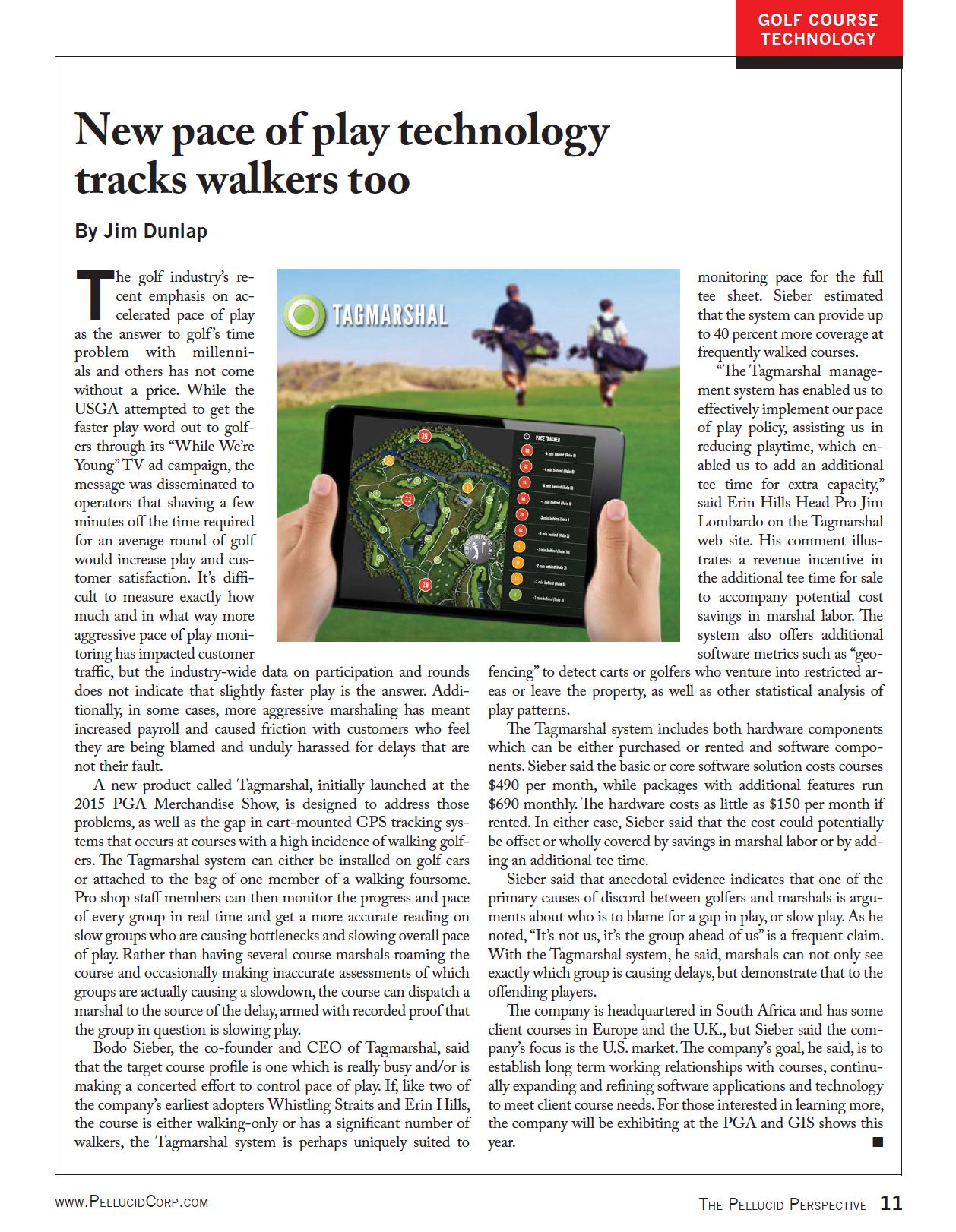 Leave your contact details and we'll get in touch to show you how the system and how it can add value to your course.
Tagmarshal set up next to PGA Technology Pavilion at PGA Show