Located in Chaska, Minnesota, Hazeltine Nationational Golf Club is a world-class facility that features ” beautifully landscaped fairways bordered with majestic woods and water features that lead to the illustrious greens.” Hazeltine was designed to host major championships while providing a pure golf experience for its members.

Hazeltine has hosted multiple US Opens and PGA Championships and is the future site of the 2024 U.S. Amateur Championship, and home of the 2016 and 2028 Ryder Cups.

In this edition of our Quick 9 series, we chat with Chandler Withington, Head Golf Professional, who shares his love for the game and what drives operational success at Hazeltine. 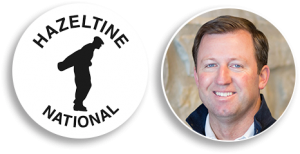 1. Has golf always been your first love? What other sports/team are you a fan of?

As a kid growing up in the mid to late ’80s, golf quite frankly wasn’t even on the radar of an 8 – 10 year old. Baseball was front and center and was my first love. I grew up going to Yankee Stadium as a kid and simply loved it. As a passionate fan of history, the Yankees lost me when they tore down the old stadium. I immediately became a fan of Wrigley Field and the team playing within it. I am and will forever be a New York Rangers fan.

Madison Square Garden is my happy place. As an assistant pro at Merion Golf Club in Philadelphia, I was able to live out my dream of having Rangers season tickets. I would drive an hour to Princeton and then catch an hour train ride to MSG. Making a four hour round trip 20 – 30 times per year should give you an idea of how big a fan I am.

2. What is your favorite/greatest round of golf experience?

I feel fortunate to have many rounds to choose from. However, I have told many people life may never get as good as it was when I was 16 and playing on caddie Monday’s at Somerset Hills Country Club in New Jersey. To preface, this is what I refer to as the good ol’ days – before I had a drivers license and a cell phone.

My friend and I would get dropped off at 7 a.m., played 36 holes by 1 p.m., drop our bags and walk 3/4 of a mile into town for lunch and ice cream, walk back and play another 36 holes and then have a putting contest until dark when our parents returned to pick us up.

Think about that – we got dropped off and went 14+ hours without communicating with our parents or anyone else for that matter. Life was so simple and free. I hope to relive that day at some point of my life if I am physically able and if Somerset Hills will let me!

3. What is your dream golf destination? Why?

This is another really tough one. My answer seems to change on a weekly basis as there are so many great places on this planet to visit. If pressed for an answer right now I would take a trip to London and beat up heathland golf – Sunningdale, St. George’s Hill, Swinley Forest and Walton Heath before heading east to the coast to visit Royal St. George’s, Royal Cinque Port, Princes Golf Cub and Rye.

Getting a blend of heathland and links golf in one trip is the good life. I love the history behind the older courses, as well as the formality.

4. Where does Pace of Play rank as an industry priority? Top 3?

I feel the three biggest obstacles to getting people to play golf are accessibility, cost and time, so pace of play is certainly in the top 3.

5. Why has your course decided to invest in Tagmarshal?

We felt we needed to find a more efficient way of monitoring pace of play, while also having solid records to stand upon when needed. Along came Tagmarshal and we found exactly what we were looking for.

6. What are the top benefits of incorporating Tagmarshal into your daily operations?

The biggest perk is being able to look at any computer screen, tablet or phone and see where players and groups are at any moment. The best feature in my opinion is the text notifications, which alerts you of groups that are losing their position.

Rather than sending a course ranger around the course looking for slow groups, Tagmarshal does the work for us. When we receive an alert, we know exactly which group to approach.

8. Who’s the slowest and fastest player on Tour?

Bryson Dechambeau’s slow times have been well documented. Despite what he believes, the answer is not walking faster between shots, but being ready to play when it is your turn and not taking any longer than 30 seconds. As he just won the U.S. Open, it is hard to argue with his approach. However, I feel he would play just as well, if not better, if he thought less and just reacted.

The fastest player would have to be John Daly, especially when he stops caring. Grip it and rip it came from him, and he doesn’t take long to do it.

9. If you could be a caddie on Tour, whose caddie would you like to be, and why?

I will go a different direction here and say Danielle Kang. I like a player who plays with passion and has swagger and presence. In getting to know her existing caddie Ollie, I know enough to know Danielle has high expectations for her caddie. I feel I perform my best with the stakes are high, so I would enjoy the pressure.

Danielle also won my family and I over by being one of the few players from the KPMG Women’s PGA Championship to write me a handwritten thank you note following the tournament. As a big note writer myself, she is my kind of person. She was incredibly kind to spectators throughout the week. I would want to be sure I am working for someone who treats the fans well.

Leave your contact details and we'll get in touch to show you how the system and how it can add value to your course.
The Wednesday Match Play podcast hosted by Ricky Lee Potts interviews Bodo Sieber,...