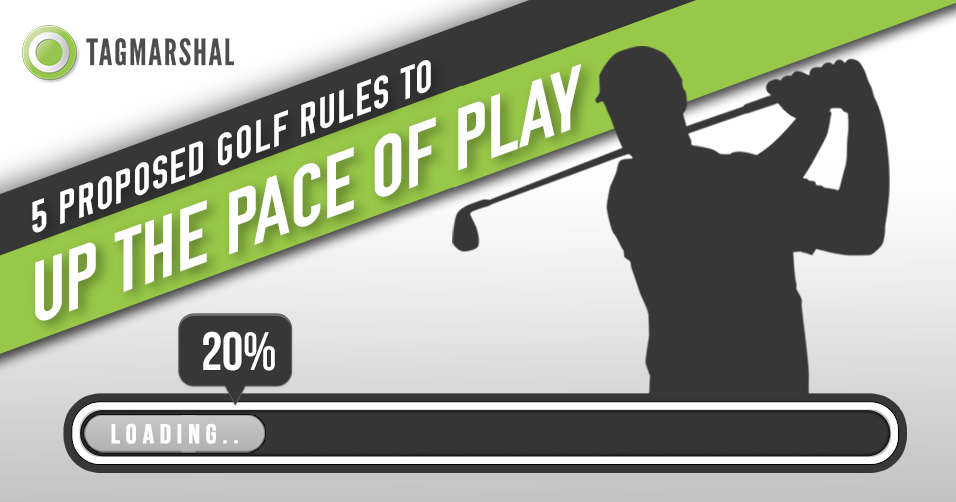 5 proposed golf rules to up the pace of play

After much anticipation, the Royal & Ancient Golf Club and the USGA finally released a draft of modern rules aimed at speeding up the pace of play and simplifying some of golf’s more complicated rules. Here’s what you need to know.

The proposal involves reducing the number of rules from 34 down to 24. Below are the five suggested changes, that we believe will help adjust the Pace of Play to help satisfy golfers and course owners alike. Based on public feedback during a six month public comment period, these could become effective as early as 2019.

A Taste of the Proposed New Golf Rules

So how do we define playing ‘promptly’? It’s a loose definition, open to abuse and the possible creation of conflict, right?

This new rule sets an acceptable boundary for those who aggravate fellow-players and impact course revenue-generation: players have to make each stroke in no more than 40 seconds.

Research from Columbia University (New York, NY) that appeared in the International Journal of Golf Science revealed that “player dynamics, like not moving directly and briskly to your own ball and not being ready to hit when it is your turn” may add as much as one hour to the time to play a round.

While some may feel even 40” is a bit long, here peer-pressure counts – and we believe that the vast majority of players will usually take their shot in less time.

2. PLAYING OUT OF TURN IN STROKE PLAY

It’s official, the USGA has done away with what was seen by many as an ambiguous rule. In stroke play, if a player plays out of turn to speed up play, there is no penalty, provided it’s not done to give a player in the group an advantage.

In Matchplay it used to be that while there was no penalty, their opponent could ask them to replay, as close as possible at the spot from which the original ball was last played (unless they had explicitly given them permission as per rule 10-1c at the time). With this new rule, that is no longer an option.

At TagMarshal we believe this is a rule that simply streamlines the modern game in keeping with necessary changes sweeping throughout golf. – Like many,we’ve seen positive results at courses promoting ‘ready golf’. A research paper from Columbia university (NY, NY) referred to a 2005 study by Frank Thomas that found the “time commitment to be the major barrier to people playing more golf. Many commentators have said similar things, and no one complains that a round of golf is too fast”. Faster rounds equal better golf experiences.

This may bug the ultra-competitive amongst us, but a player’s score for each hole is capped at a maximum set by the course Committee. This may be fixed at a 6, 8 or 10, etc., related either to par or the player’s handicap.

A player who does not complete a hole (often referred to informally as “picking up”) would not be disqualified, but simply gets the maximum score for the hole.

This is far preferable to putting an “X” on the scorecard, or that “put me down for a whatever” playing partner. Now there is a definitive number. This rule will be a massive relief for those who insist on playing every stroke through the hole, even way up into the high teens. This rule makes TagMarshal’s head golfer smile.

4. UNPLAYABLE BALL IN A BUNKER

Let’s face it, this is about as bad as it gets when coming to a bad ‘lie’ — there’s nothing worse than arriving at a bunker only to find your ball embedded in the lip. Yes, there is a two-stroke penalty for taking relief outside the bunker, but it beats 15 minutes of swinging in the sand and you get a clean lie.

5. OTHER CHANGES TO HELP PACE OF PLAY:

Players will still drop a ball when taking relief, but that horribly pedantic rule detailing how a ball may be dropped is simplified. There are now no limitations on how the ball must be held or height it must be dropped from; the ball would simply be let go from any height above the ground (or any growing thing or other natural or artificial object ) so that it falls through the air, rather than being set down or placed on these things. This is a fantastic change, and as close as it gets to placing a ball.

There is even a traditionalist blow to the God of Golf, allowing a player to putt with the flagstick in the hole.

Which rule do you believe will have the biggest impact in the pace and on your game personally?

Leave your contact details and we'll get in touch to show you how the system and how it can add value to your course.
Booking system integrations for seamless pace of play management

Golf Business – Using Time as a Tool
Scroll to top