Everyone knows that pace of play, more commonly described as slow play, is a big problem in golf, and Fota Island is the first Cork course to introduce a new technological aid to help manage this issue.

The five-star resort is one of the first courses in Ireland to launch the groundbreaking Tagmarshal system. The new system provides an easy way to monitor every group on the course. 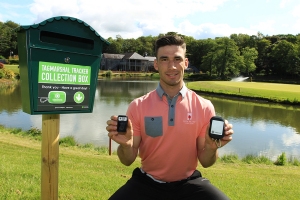 Using data analytics and advanced algorithms, the system creates a heat map which identifies areas on the course where delays are likely to happen.  As the system tracks golfers in real time, any group that’s out of position can be easily identified.  Prior to the use of this technology, many courses including Fota Island would have used a course marshal.  While a roving course marshal will have a good understanding of the pinch points on the course and the reasons why golfers can fall behind, covering the full course is an obvious problem.  From an iPad in the pro shop or office, any of the golf operations team can quickly identify a hot spot or a group that’s out of position.

From there (or from a buggy on the course) it’s an easy job to get to the hot spot and identify and help correct the issue.  Tagmarshal allows courses to identify delays and problems in real time.  And as the data is clearly displayed on the iPad, it helps to avoid any subjective arguments from specific groups about the pace of play.

It’s fair to say that the new technology is a big step forward, addressing an area that is a constant frustration for many golfers.  The aim of Tagmarshal is to identify and solve problems, which in turn leads to an improved member and guest experience.  And as it’s a small portable unit, it’s suitable for every group whether they have a buggy, a cart or they carry their clubs. “We introduced Tagmarshal to help people get around a golf course in a reasonable time to allow everyone on the golf course to enjoy their golf” explained Kevin Morris, The Resort’s Director of Golf.

“Tagmarshal has been received very well by all in its short time at the Resort.  I think we all agree, golf needs to speed up and it would seem most people are finding the tool personally advantageous.  The great thing is there is no pressure involved, people want to get around the golf course in a reasonable time, and this seems to help them.” 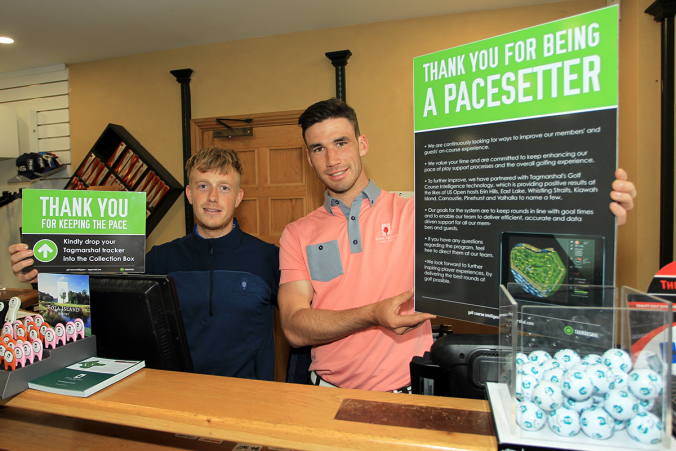 The three different course layouts in Fota Island (Deerpark, Barryscourt and Belvelly) are all capable of providing a European Tour level test, the course team at the resort can also set the courses up to suit the golfers on any given day. Tees, pin positions and green speeds are all variables that allow management to balance the challenge against the enjoyment for casual golfers, regular members and guests, all the way up to elite amateurs and PGA Professionals.

Tagmarshal is being rolled out to all golfers at the Resort. Golf tourists, hotel guests, societies, corporate groups, and members are all asked to take a Tagmarshal unit when they sign in at the pro shop.  And the results are that is has reduced the time for every category highlighting the effectiveness of the tool according to Kevin:

“The feedback has been very positive, with golfers commenting favorably and finding the tool helping them. On many occasions, we have seen rounds under four hours which is appropriate even for a big course like Fota Island Resort.  Indeed there were a few examples of golfers taking over 40 minutes off previous round times, while this will vary, it would seem that everyone can benefit.”

Tagmarshal has been used in the US since late 2015 and was rolled out in several high profile public courses and private resorts.  The average time-saving at a resort level course in the US was 19 minutes.

In Ireland Waterville, Ballybunion and Dooks are also users of the new technology with similarly positive experiences for golfers.  From the Fota Island perspective, the same is true according to Morris: “Tagmarshal gives you the exact information of how long it takes to play a specific hole and obviously with more data, it can be fine-tuned over time. This seems to improve everyone’s enjoyment over time.”

Stephen Knoop is the Managing Director for TagMarshal and he has worked with the company since 2017.  A former professional rugby player, Stephen has seen the benefits of the system first hand, with several positive testimonials from some of the most famous resort courses in Ireland and the UK. “Course managers feedback has been fantastic as they now have complete oversight of the golf course and can manage the field pace & flow in real-time,” said Stephen.

“European golf clubs have dropped between 10-24 minutes on average.  It’s also important to remember that the system also measures pace distribution (how many groups are on time) which gives a more accurate indication of how the course is running.”  As well as providing a service to courses, the games governing bodies have also used the technology.

“We are partnered with the USGA who use Tagmarshal for their Pace of Play/Flow studies as well as their extensive research into golfer satisfaction. The R&A have used the Tagmarshal Tournament version (Tournament Track) at the Womens Amateur Championship at Royal County Down last week and the Amateur Championship at Portmarnock and The Island this week.  We have spoken briefly to the GUI and hopefully, we’ll see some movement this season.  In the professional tour space, the EuroPro Tour is currently using the system with the European Tour keeping a close eye on things.”  As well as monitoring pace and flow, Tagmarshal has also been used for a few other reasons as Stephen explained.

“The system also shows where course staff is on the golf course. One Drinks cart hadn’t moved for 2 hours on the 10th hole and should have been circling the course. The Manager headed out to find it had been quite a taxing day for the young man who had fallen asleep and got the shock of his life when he was awoken by the manager standing over him.  More recently a golfer in the Netherlands threw his bag and trolley into the course lake after another bad shot.  Having seen the red mist, he couldn’t remember the part of the large lake so we used the system to retrieve the device and bag!”

Leave your contact details and we'll get in touch to show you how the system and how it can add value to your course.
Adopting pace of play management technology for a traditional game

Boosting golfer participation at your course
Scroll to top