Courtesy of PGA Magazine, originally published here on pages 47 and 49 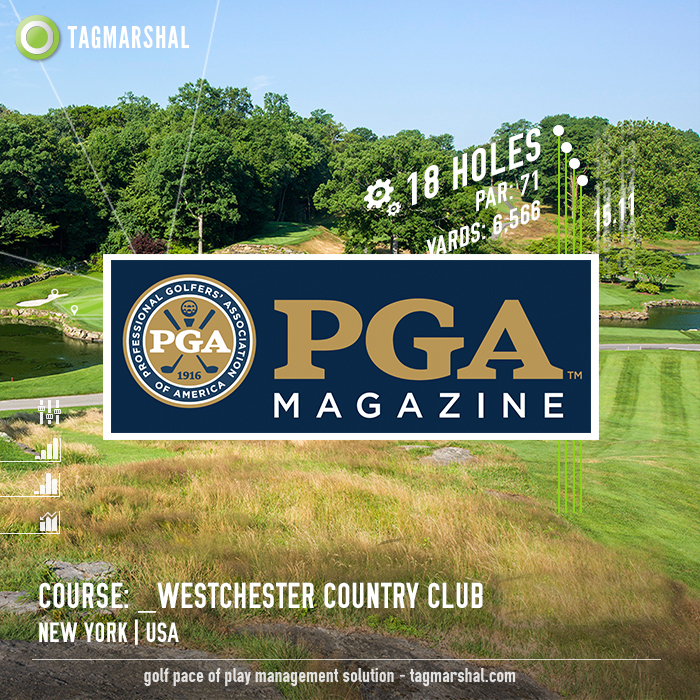 Westchester Country Club in Rye, New York, is a busy place in the summer. PGADirector of Golf Ben Hoffhine says the 45-hole private club logs more than 50,000 rounds a year, sometimes doing up to 450 rounds in a single day. Pace of play is important to keep members and their guests happy.

Hoffhine, who is in his second year at the club,has turned to Tagmarshal to monitor pace of play. Hoffhine said a trial run with the tracking product in the fall of 2017 identified problem areas and will help the club improve pace of play in 2018.

Tagmarshal uses small “tags” clipped onto golf bags or installed on golf cars that transmit geo-location data back to the clubhouse. Algorithms identify groups having trouble keeping up, as well as trouble spots on the course that slow down regularly.

Hoffhine says Tagmarshal’s ability to track walkers was critical for Westchester. Walking golfers who take caddies must mix with groups riding in golf cars throughout the day.

“Tagmarshal has told us about a couple of problem spots,” Hoffhine says. “It can tell you where your rangers should be after collecting data for a number of rounds. There are two spots, one on the front and one on the back, where we now station rangers to keep an eye on things. The other thing we found out was how much the halfway houses slowed the round, so we can now educate the members not to sit down and have a four-course meal.”

Hoffhine says the goal for this season is to keep pace of play under four hours for tee times before 8 a.m. and 4:05 for rounds the rest of the day, down from 4:10 last year.

“The data told us that our pace of play wasn’t bad,” Hoffhine says. “We have a ranger program, but instead of looking for problems, when you have the data in front of you, you can be much more efficient.”

Leave your contact details and we'll get in touch to show you how the system and how it can add value to your course.
Golf de Club Alcanada achieves yet another feat!