Through the implementation of Tagmarshal’s proprietary GPS tracking system, golf clubs are improving their operational efficiency and delivering an experience that flows from the first tee shot to the final putt.

In an attempt to better understand the key factors that define a positive golfing experience for players, the U.S. Golf Association commissioned professors Kris Schoonover and Eric Grey from the University of Wisconsin Stout to diligently research and conduct a survey on the topic.

The results, which were presented at the USGA’s 5th Golf Innovation Symposium in Tokyo in 2019, revealed that as many as 1,000 touchpoints exist that can influence a golfer’s experience at a club or resort.

Discovered was that above all other factors, positive ranger etiquette — and by extension, the openness of tee boxes and greens at each hole during a round — was the most influential element in determining a golfer’s level of on-course enjoyment. In other words, the pace at which those golfers played a course outweighed all other aspects of the layout, the club and the amenities that those golfers enjoyed before, after, or even during their rounds.

More than a half decade earlier, a trio of South African entrepreneurs recognized the importance of golf’s pace of play and thus founded Tagmarshal with the intent of developing a technology that allowed course operators to better track and manage all of the golfers out on their course and the flow of their rounds.

They created a system that utilizes GPS trackers that are carried by caddies, placed in golf carts, or attached to players’ bags or push carts if they’re walking without a caddie. The data collected is transmitted to cloud-based servers, where processing algorithms convert it into digestible analytics that are delivered to course managers through Tagmarshal’s proprietary software. 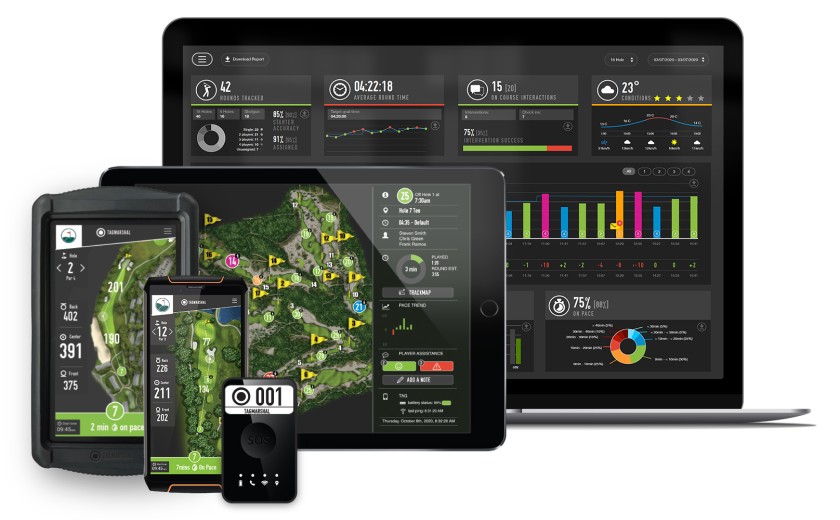 Since its inception, the Tagmarshal system has tracked more than 15 million rounds of golf and collected more than 1 billion data points. Today it’s an integral part of the operation at more than 300 courses (located in nine countries and on four continents), including resort destinations such as Pebble Beach Golf Links and Bandon Dunes Resort, as well as private clubs such as East Lake Golf Club, Oakmont Country Club, and Winged Foot Country Club. At present, Tagmarshal is projected to service as many as 386 clients by the beginning of spring.

“If pace and flow of play improves, capacity can be added,” said Bodo Sieber, Tagmarshal’s CEO and one of the company’s co-founders. As Sieber acknowledges, when he and his team introduce the Tagmarshal system to prospective clients, their sales pitch highlights the system’s ability to not only enhance a golfer’s experience on the course, but to improve a club’s bottom line. “Our goal is to bring data and systems into this space and help people work smarter and improve the way they operate.”

The implementation costs of the Tagmarshal system can range from $500 to $1,500 per month, depending on the specific tier of software that a club selects, as well as how many optimization bells and whistles are chosen. “The goal is for the system to pay for itself immediately and generate savings and considerable revenue over time,” said Sieber.

According to Sieber, there are no other companies on the market that provide all of the services that Tagmarshal specializes in. Some, like Club Car Visage and Textron Fleet Management (affiliated with E-Z-GO), offer GPS systems that allow clubs to better manage and track their fleet of golf carts; but tracking golf carts is only one piece of the puzzle when it comes to optimizing pace of play on the golf course.

Erin Hills, located about 29 miles northwest of Milwaukee, was the first golf course to buy into the benefits of Tagmarshal’s system.

“We’re always interested in technology and data,” said Jim Lombardo, Erin Hills’ head golf professional. “That’s the way the industry is heading with stats and more stats. You have to know your business.”

When Erin Hills became Tagmarshal’s first client, the golf course’s staff only partially knew its business. The course had been open only a few years, so Lombardo, the small collective of course rangers, and the dozens of caddies didn’t have much experience upon which to make decisions that would impact the course’s set up. 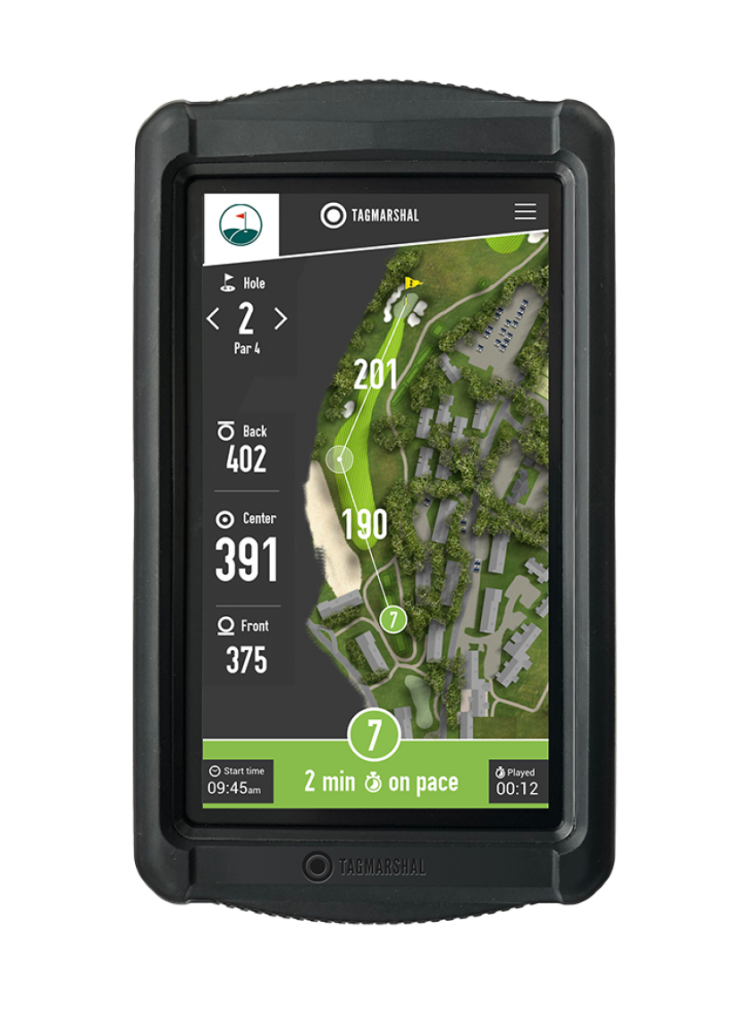 The data provided by the Tagmarshal system led to some surprising revelations. For starters, the Erin Hills team discovered that not only did some of their pace-of-play slowdowns occur within the first four holes of the course, but the very first hole — a swooping par 5 that doglegs to the left and skirts wetlands along its inner boundaries — was delaying groups immediately and preventing them from getting into their rounds with the proper pace.

To mitigate the problem, the course’s superintendent trimmed back the fescue by 10 or 15 yards along the right side of the fairway, making it easier for those amateurs who had sliced their tee shots off line to not only find their balls but to have a playable lie by which they could advance their second shot and continue moving forward.

As Lombardo acknowledges, the system also allows course rangers to quickly pinpoint the cause of a backup, if and when one starts to develop.

“We don’t waste time driving around trying to find those people, trying to find the bottleneck,” he said. “Now we can look at the computer screen and know exactly what group is falling out of position. The enjoyment of the players has increased because we’ve been able to ranger the appropriate groups at the appropriate time. We talk to them early and get them going.”

At Pinehurst Resort, the Tagmarshal system is utilized on the No. 2 course and the No. 4 course — the two most frequently played and most popular courses of the nine layouts available to resort guests. Not unlike at Erin Hills, the Tagmarshal system has empowered the Pinehurst golf operations team to make sure that comfortable and free-flowing rounds of golf are played, starting from the very first tee box.

“It can tell you if your starter is starting individuals on time,” Pinehurst’s head golf pro Matt Barksdale said of the system, “and that’s paramount on making sure your golf course flow is correct.

Although some clubs might only look at the average length of time that it takes golfers to complete 18 holes at their facility, Barksdale recognizes that it can’t be assumed that a four-hour round was an enjoyable four hours spent out on the course.

The data that Tagmarshal delivers can assist course operators and their staff in that regard, too. On Pinehurst’s No. 2 course, for example, the fourth and fifth holes run parallel and they represent two of the course’s more difficult holes. Because of that, it’s not uncommon for groups to need 40 minutes from the time they hit their tee shots on the 4th to the time they sink their putts on the 5th. A long par 3 awaits those players as they walk off the fifth green, so it’s easy to see how this stretch of holes can quickly produce backups on the course.

Yet, the Tagmarshal system allows course operators to see where groups are waiting on the course, so in areas like the aforementioned three-hole stretch on the No. 2 course, Barksdale and his team can move tees up or choose more challenging (or easier) hole locations to control where players might have to wait if backups do occur.

“On a par 5, which hole five is, we might make it reachable in two so that those individuals are waiting in the fairway instead of waiting on the sixth tee box,” he said. “That gets into some of the flow or you might even say the psychology of on-course experience. If you’re waiting in a fairway to try to hit on a green in two on a par 5, you’re probably less likely to get frustrated with your wait because you’re going for a green in two.” 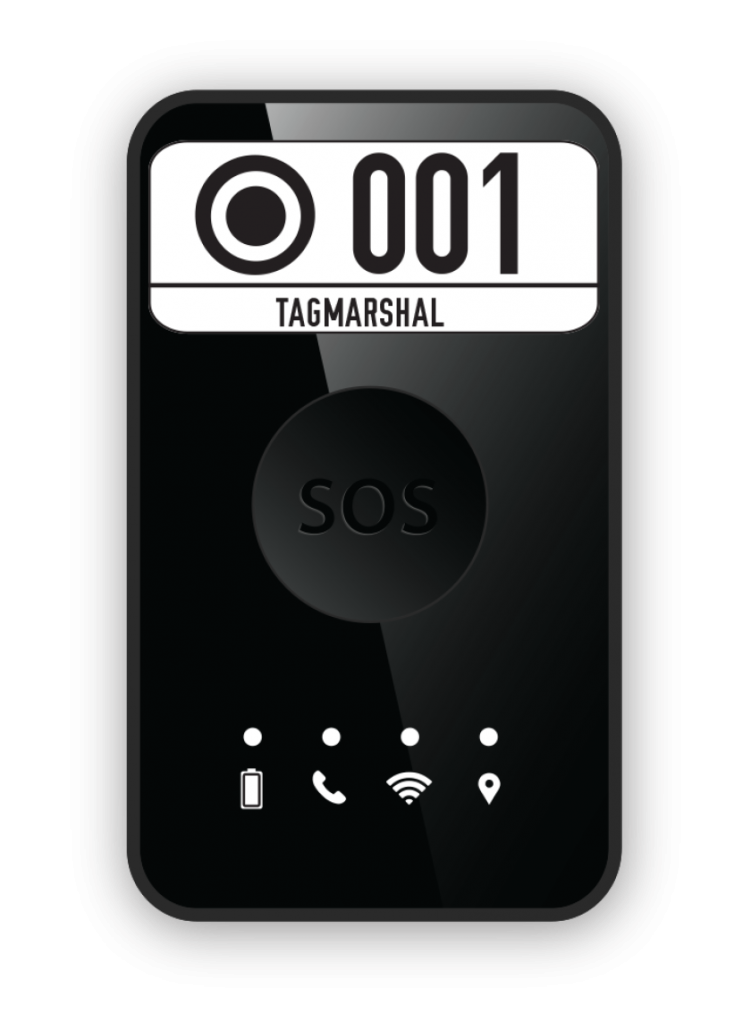 DATA DOES NOT LIE

Four years ago, Destination Kohler aligned with Tagmarshal, incorporating the system into the daily operations at its two distinct golf destinations — Blackwolf Run and Whistling Straits. In that time, Mike O’Reilly, the director of golf operations, has seen the number of on-pace rounds increase from 58 percent in 2016 to 82 percent in 2020. He’s also observed the average round time decrease by 15 minutes.

That efficiency and the improved flow of rounds on the course has allowed Destination Kohler to add one or sometimes two additional tee times per day on each of its four courses during the season. And while O’Reilly prefers to focus on the ways that a golfer’s experience on those courses is elevated, he does acknowledge the profitability that can come from making additional tee times available, especially on The Straits course.

“If you want to book a tee time on the Straits course you have to stay at the resort one or two nights,” he explains, “so by opening four players up on the Straits course, we’ve now gained those four players for possibly multiple nights at the hotel. And if they’re staying multiple nights at the hotel, they’re probably playing other rounds of golf and dining with us. Those four or eight players that we’ve added on the golf course equate to helping the entirety of our business at the resort.”

O’Reilly is quick to point out that because Destination Kohler is a bucket-list golf destination, the resort’s success doesn’t hinge on tightly packing a tee sheet with the maximum number of foursomes in a day the way a daily-fee public course might.

“The addition of those four or eight players on a daily basis with all the sunk costs in the golf course maintenance and maintaining your facility, it’s dropping straight to the bottom line, whether it’s $200, $400, or $800 dollars, whatever the case may be,” he says. “You do that 150 times throughout the year, it’s significant.”

Tagmarshal’s first client discovered that for themselves. According to Lombardo, Erin Hills’ top priority for partnering with Tagmarshal was to better understand where and how the pace of play on its course could be improved. “The revenue that came in was unexpected,” he said.

That revenue also wasn’t insignificant. Depending on the year, Lombardo acknowledges that the additional tee times that the course has been able to add has amounted to $140,000.

“That’s some pretty good revenue that was left on the table before,” he said. “It [the system] pays for itself ten times over.”

Leave your contact details and we'll get in touch to show you how the system and how it can add value to your course.
Webinar: Pace of play – How do you create premium on-course experiences,...